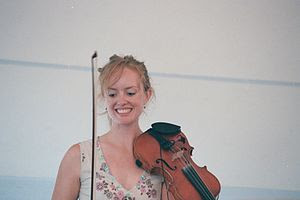 The Christmas spectacular that has sold out shows throughout New England returns to The Music Hall this season for what promises to be an unforgettable holiday event! A top-flight cast of singers, musicians, and dancers join Brian O’Donovan, host of NPR’s wildly popular Celtic Sojourn, for a festival of traditional and contemporary music from the Celtic countries and England.

“People of all ages will be enchanted and uplifted by this unique holiday celebration,” says Patricia Lynch, Executive Director of The Music Hall. “It’s a memorable treat for the entire family, made even more magical in the landmark Victorian environment of our historic theater. Don’t miss it!”

This year’s show features an exciting variety of singers, musicians, and dancers steeped in Celtic traditions and other influences. Newcomers to the cast include Ruth Moody, the wonderful Canadian singer who is part of the trio The Waylin’ Jennys, now a staple on Garrison Keillor’s A Prairie Home Companion. As well, a whole new selection of dancers has been assembled especially for the show.

The cast also includes the popular singer Len Graham, who hails from Derry in the north of Ireland. He's gained an international reputation not only for his inimitable singing style, but also for the breadth of his knowledge of Irish folk music. And Simon Chrisman, who is part of the rising star lineup of The Bee Eaters, is bringing a new instrument to the stage — the Hammer Dulcimer. Plus, the Uilleann Pipes will be featured, courtesy of Kieran O’Hare.

Multi-instrumentalist Seamus Egan of Solas is back on stage, and, again acting as music director for the show. He will be joined by long-time collaborators Chico Huff on acoustic bass, and, new to Christmas Celtic this year, percussionist Ben Wittman. Kevin Doyle makes his return to the show, not just as a spectacular dancer, but also as the dance director. He will be introducing a group of younger dancers from the Boston area to create some toe-tapping magic on stage.

Artistically directed again by Paula Plum, this promises to be one of the most spectacular and enjoyable Christmas Celtic Sojourn concerts yet!
Celtic Sojourn Lights Up Music Hall - Portsmouth, NH Patch